Rodents pose a serious risk to both your family and your home. Rats and mice carry over 35 diseases, such as hantavirus, salmonella, and leptospirosis. They can also cause allergic reactions, contaminate your food, and increase your risk of an electrical fire by chewing through wires. Rather than struggle with DIY treatments, trust Barrier Pest Solutions.

Ants are among the most common pests in households and other structures. Ants belong to the order Hymenoptera as do bees and wasps. Ants are social insects that live in colonies. Scientists have found supercolonies of the ants in California as well as the rest of the world. These supercolonies can span many miles and have hundreds of millions of ants in them in connected colonies!

Ants Weigh as Much as Humans! 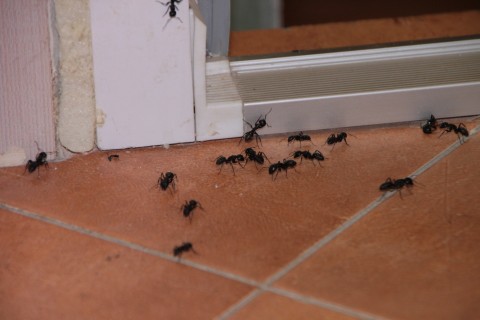 Ants often invade homes in search of food and water, as a dry refuge, and to nest in some cases. Ants can be a cause of anxiety and stress and cause havoc in the kitchen. Some species cause property damage while others can inflict a painful bite or sting. Removing an ant colony from a home and preventing ants from re-entering once they are established often requires dedicated efforts from pest control professionals.

Although there are thousands of species of ants in the world, the following is a list of the most common ants we would most likely encounter in California: Argentine ant, Thief ant, Odorous house ant, Crazy ant, Ghost ant, Pharaoh ant, California fire ant, Pavement ant, Carpenter ant, Harvester ant, and the Velvety tree ant.

Ants are social insects that live in colonies. They will nest in a variety of locations for example in the soil, under stones, tree stumps, and at times even in your home. 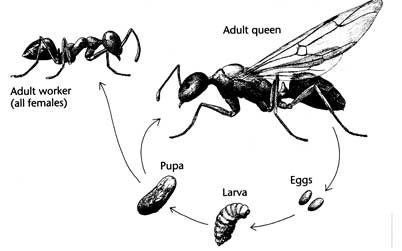 Ants have a complete life cycle starting from an egg, to larvae, pupae, and adult. They have three main castes: queen, male, and worker. There is a division of labor among its members.

The queen is a fertile, egg-producing female, who is responsible for the reproductive function of the colony. The males are winged and their sole function is to mate with the queen; they die soon after mating.

The worker is a sterile female and is wingless. Her duties include foraging and gathering food, caring for the larvae, and defending and expanding the colony and the worker ant makes up the vast majority of the colony.

Ants are omnivorous, which means they can eat almost anything including sweets, honeydew, fruits, grasses, oils, and insects. Food preferences vary among ant species, the time of year, and the needs of the colony.

Once a foraging ant (called a scout) finds food, she will leave a chemical scent trail back to the nest leading others from the colony to the newly found food source. At times this trail leads back to your home which is when you might need our help.

The problem most homeowners run into when treating ants themselves is using ineffective treatments like store bought pesticides, cayenne, etc. These DIY approaches only work temporarily in almost all cases and will not remove the colony from the property. This will provide temporary relief and buy you some time but will not solve the problem. To get permanent relief consider using a trained professional.

We are specialists in Ant Pest Control and have established our own proven methods and protocols.

Get a Free Estimate